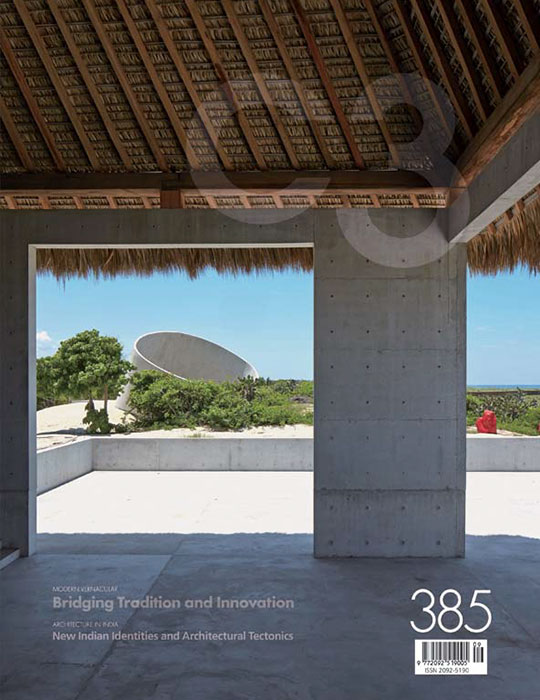 As the main feature of this issue of C3 magazine, five projects are examined that deal with the theme of modern vernacular. It addresses the question of how architects today can reconcile the two seemingly disparate approaches of contemporary gestures and historic traditions into a single, cohesive design. This reinterpretation by architects of regional building practices and vernacular style in a modern context comes to the fore in projects like.

the Riparian House by Architecture BRIO

What is India’s contemporary architectural identity, and where do its roots lie? With India’s diverse cultural landscape, its colonial heritage, its various climates and geographies, is there an archetypical identity for its architectural lexicon? If so, how does it manifest itself? From the history of craft development, through the cultural transformations wrought by trade and encounters with colonial powers and the metamorphosis into a young democracy, what are the influences that have been integrated into India’s visual culture and architectural language? After independence, there was a florescence of nationalism. To question and to define Indian singularity, Mahatma Gandhi looked to the traditionalist past, while the first prime minster of India, Jawaharlal Nehru, rejected British legacies and its colonial vernacular, looking forward to the future through an endorsement of modernism.
In 1950, Nehru invited Le Corbusier to design and construct the new city of Chandigarh.

Le Corbusier’s scheme abjured India’s colonial past and inspired the country’s future architectural vocabulary. Government institutions and other important building clients soon adopted this version of modernism – the International style – eschewing traditional social and cultural typologies. With the advent of economic liberalization in the latter years of the twentieth century, India was exposed to new ideas and was able to access new materials and services from rest of the world. India’s architecture again exhibited many western architectural attributes and renounced cultural idioms.1 Today, however, architects and designers are looking to the past and celebrating and drawing on India’s cultural heritage to explore new identities and architectural tectonics. The article explores numerous current architectural examples, from private residences and religious community buildings to an Architect’s own office, to investigate and understand India’s architectural pedigree and address the question of its contemporary architectural identity.