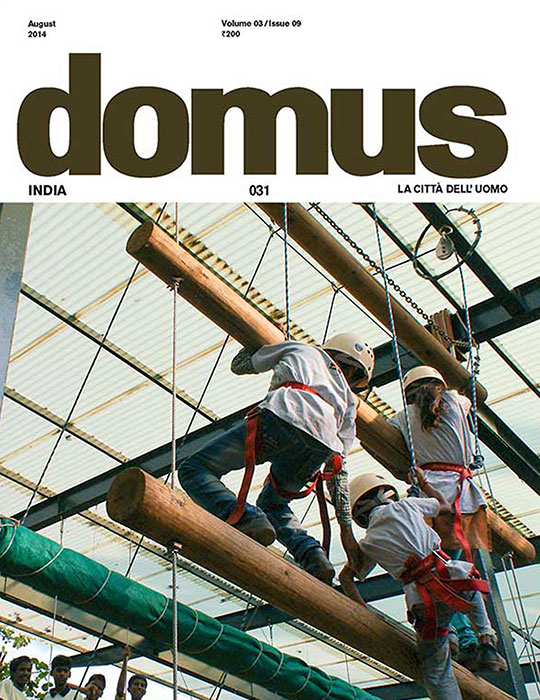 House on a Stream – Artifice and Nature

This retreat in Alibaug becomes a languid arrangement of a set of spaces. They swerve and position themselves within a verdant landscape to afford its inhabitants a range of views that encompasses aspects in the distance in close proximity.

by Suprio Battacharjee as published in Domus India in August 2014

The leisure home is always an enticing proposition to behold. As a building typology that, by its very nature, end up finding itself on ground distance from the density and hustle-bustle of the city, the leisure home benefits from the absence of constraints imposed upon the city. On open ground, one comes close to realising an idealised vision of living. A vision that is in congruence with that of the residents’ ideals. Nonetheless, this sense of freedom has always offered us engaging views of man’s direct interrelationship with the environment. More so it has offered insights into the specifics of the ground on which these houses sit. Therefore it has brought us broader world-views of the interaction between the artifice and nature, between a settler and the wild.

Alibaug is this place off Mumbai’s hustle and bustle where those who can, afford themselves a slice of the idyllic. An experience that is lost to the city-dweller. This landmass across the city’s harbour has always been that place of retreat. It is a now tamed landscape where former groves of trees and open farmlands offer one a chance of escape, as well as therapeutic getaways. However the brief they might be, they allow the architect to explore aspects of a site’s condition, often achieving startling results. Once such getaway is this dwelling by Mumbai based practice Architecture BRIO.

One leaves their vehicle behind, to find oneself chancing upon a set of stark grey concrete volumes. Large, boulder-like spread themselves out over the landscape. They seemingly reach out to the views beyond. In the centre a shallow riverbed of a seasonal stream dissects these volumes. A bridge affords access to an apparently closed volume. This sculptural form sits on what one begins to realise is a spur where the streamed makes and s-curve through the site.

This block consists of, what appears from the outside, a large skewed volume heaving itself up from the stream bed. At the same time another volume pivots off it and cantilevers over the rivulet after it has turned. This houses the master bedroom suite. The closed volume that greets the visitors also encloses a bathroom and dresser. In addition an open-to-sky shower space allows one to peek form the hull of this concrete container through a minuscule cut in the wall.

The bridge leads from a trellised pavilion or pergola structure that connects to the aforementioned access way. In turn this leads to the main body of the house. A narrow body of contained water along this shaded pathway strikes a connection of the season stream beyond. It acts as a celebration of it during the monsoons, and a memory of it during the dry season, as the architects put it. Despite the monolithic nature of the houses external appearance, once could read the main body of the dwelling as a set of interconnected volumes.

While they find their way around the existing trees of the site, they gently swerve and reposition themselves to occupy the interstices of the landscape. As a result they afford its inhabitants a range of views that encompass aspects in the distance and textures on close proximity. Thus, the living room heaves off the ground like the hull of a beached vessel. It draws in the view of the hills in the distance. A the same time, a window is positioned to make one gaze at the bark of a tree that begins to define a shaded court.

Elsewhere, the bedrooms become nothing less than containers of the landscape they gaze out onto. With their projecting planes of concrete and metal they act like barn doors, focus lights or visors. They offer their occupants a chance to be at one with the mis mis-en-scène. This is emphasised by large sliding and folding doors that move sideways to dissolve the boundaries of the rooms. As such, these splayed volumes can also be read as viewing devices. They obscure aspects of the surroundings while emphasising others.

In that sense they begin to define a specific relationship the occupants share with their surroundings. This is in contrast to the dissociation of the building’s volumes from the ground at its extremities. This formal strategy is described by the architects as a measure to ‘defy the heaviness of the concrete volumes. By not resting it on the ground, the relationship with the landscape is paradoxically strengthened.’ This interplay of a sense of weightiness and levitation allows on to read this as a metaphor for a set of large geological entities or a manmade hull.

The sense of inner open-ness belies the hermetic nature of the house as it may be perceived from the outside. In many ways it strikes a deep connect with traditional typologies of a courtyard house. Here, the dwelling has a remarkable sense of open-ness from within. But instead of  the traditional typology, the central courtyard is replaced by a voluminous kitchen. This space is in fact the largest and tallest spatial entity within the house, which stems from the client’s passionate desire to make cooking a central activity.

As such it becomes a strategic typological inversion that one could see as to engender the distinct ‘disembodied’ nature of the house. Here, building volumes begin to creep away from the spatial knot. Thus, it subverts the generic tendency of the single building figure with a contained spatiality. In favour of a rhizome-like spatial organism it attempts to strike a varied dialogue between figure and ground.

In fact, one can begin to read the house as the materialisation of a continuous cavern. A strange and luminous burrow, hollowed out from gigantic boulders pinwheel from the centralised kitchen. A metaphorical core of warmth, cheer and bonhomie forms a set of interconnected spaces. However, they seek to offer atmospheres of withdrawal as much as that of connect.

The abstract, sombre monolithic volumes are cast in plank-finished concrete. They stand in stark grey contrast to the timber and soft white of the interior. Here the light-filled burrow gazes out onto greens on all sides, a space of verdant immersion. A space for pause that facilitate a deep gaze at nature’s changing moods. A space for flitting in between these opportunities for pause.

The grey of the concrete will gain a patina over time. It will become at one with the temporal shifts that the landscape will encounter. As such, the burrow or cave finds for once a strange interconnect with the nest or aerie, as the house’s spatial entity emerges over the stream bed.  These experiential transitions between the self-enclosed spaces meant for the perfunctory daily rituals of living, and the inescapable presence of the landscape and the elements within which these are enacted can be seen as the house’s key phenomenological and kinaesthetic construct.