Design Duo That Heroes Both Nature And Urban Architecture 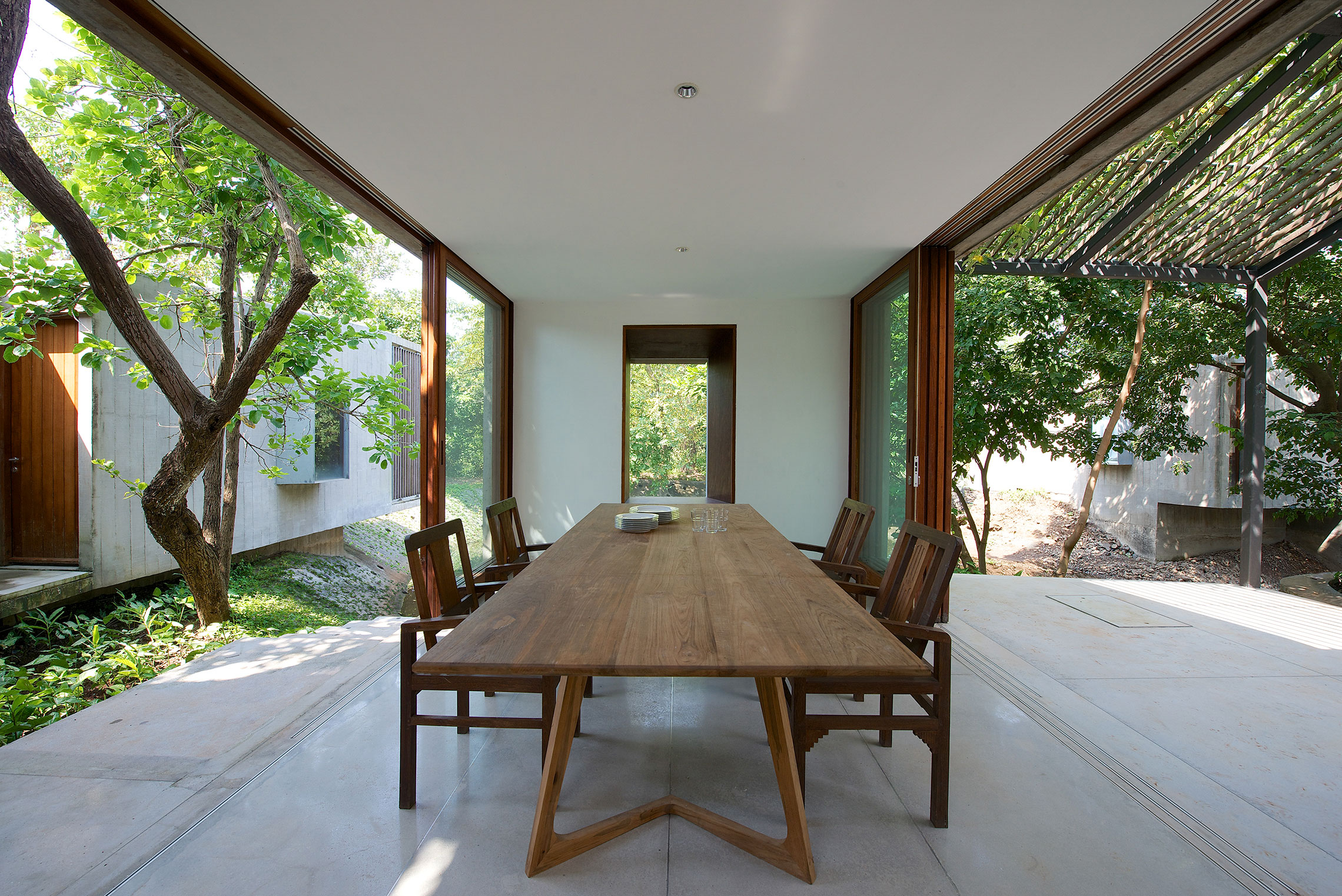 this article appeared first on: Homegrown.in

“Architecture should play to all the senses – the smell of vegetation after rain, the sound of birds and the wind in the trees, the texture of clay floor tiles and rough plaster.”

Across the globe, architecture has had a ubiquitous and rich history of interacting with its natural surroundings. From the hanging gardens of Babylon to the verandas of colonial-era bungalows, tedious effort and time have been spent crafting designs that best allow a structure to become a part of the landscape it sits upon. Yet, modern trends often show a relatively harsh disconnect between people’s homes and the land that frames them. Of course, most people don’t want hordes of critters and insects traipsing around their abode, but that doesn’t mean the outdoors need to be cut out from one’s residential life completely. In fact, if you are cocooning yourself in a rectangle of cement, chances are you are actually doing yourself harm.

Architecture techniques that seclude people from nature are usually rather deficient in natural light, which is the primary way people intake Vitamin D, an essential mineral for all humans. In fact, natural light is so beneficial to humans, various studies have routinely demonstrated that hospitalized people recover much faster when presented with a view of trees, versus a brick wall. Moreover, many at the forefront of environmental psychology believe a person’s well-being is closely related to an instinctive ‘biophilia’. This vein of psychology is rooted in the work of biologist E. O. Wilson, who put forth that humans have “an innate and genetically determined affinity of human beings with the natural world.”

This notion may fall flat for those who shriek ‘creature!’ every time they see a salamander, or for those who prefer looking at nature through the screen of their laptops rather than the screens of their windows; however, don’t be too quick to write off this theory has ‘crunchy granola’ or ‘hippie dippie’ propaganda. This article is not a damning indictment of anyone who doesn’t have DIY (DoItYourSelf) hut deep in the jungle. The point being made is that people can couple modern comforts and sleek aesthetics with a home that interacts beautifully with the nature around it.

If you don’t believe me, it is time to meet Robert and Shefali of Architecture BRIO. They, rather successfully, strive to include nature in their progressive designs. Instead of brazenly flattening land, this design duo maps out a structure according to space with which it will most appropriately coexist. By entwining their tasteful vision with a comprehensive and sustainable outlook, Robert and Shefali manage to not only create domains that appear visually stunning but also draw on the natural benefits of a property. Simply, BRIO’s designs are delineated by playing to a given plot’s strengths.

This discerning ability has rightly put them on Architectural Digest’s top 50 most influential designers in India for the past three years in a row. Maharashtra is now peppered with their creations, featuring an eagle eye penthouse duplex in Mumbai, the sprawling Riparian House on the ghats in Karjat, House on a Stream located in Alibaug, as well as Tala Treesort, a tree villa eco resort next to the West coast’s Kuda Caves. However, their designs are not limited to a single state. Architecture BRIO have taken up projects in Goa and worked with various NGOs to bring the Etania Green School to life in Beaufort, Malaysia. They are also currently in the process of building an expansive Himalayan abode in Uttarakhand.

A Peek Inside BRIO’s Incorporative Ingenuity

The integration of water is a common motif in BRIO’s designs, yet the manner in which they graft streams and ponds to their structures allow the water bodies to breathe life into their work. Bringing an existing stream into the composition of their creations is not only aesthetically pleasing but also works as a sustainable attribute to the property. Building next to water bodies can cool the air and nourish the local ecosystem, which in turn provides thicker foliage and denser biodiversity to plants nearby the structure. 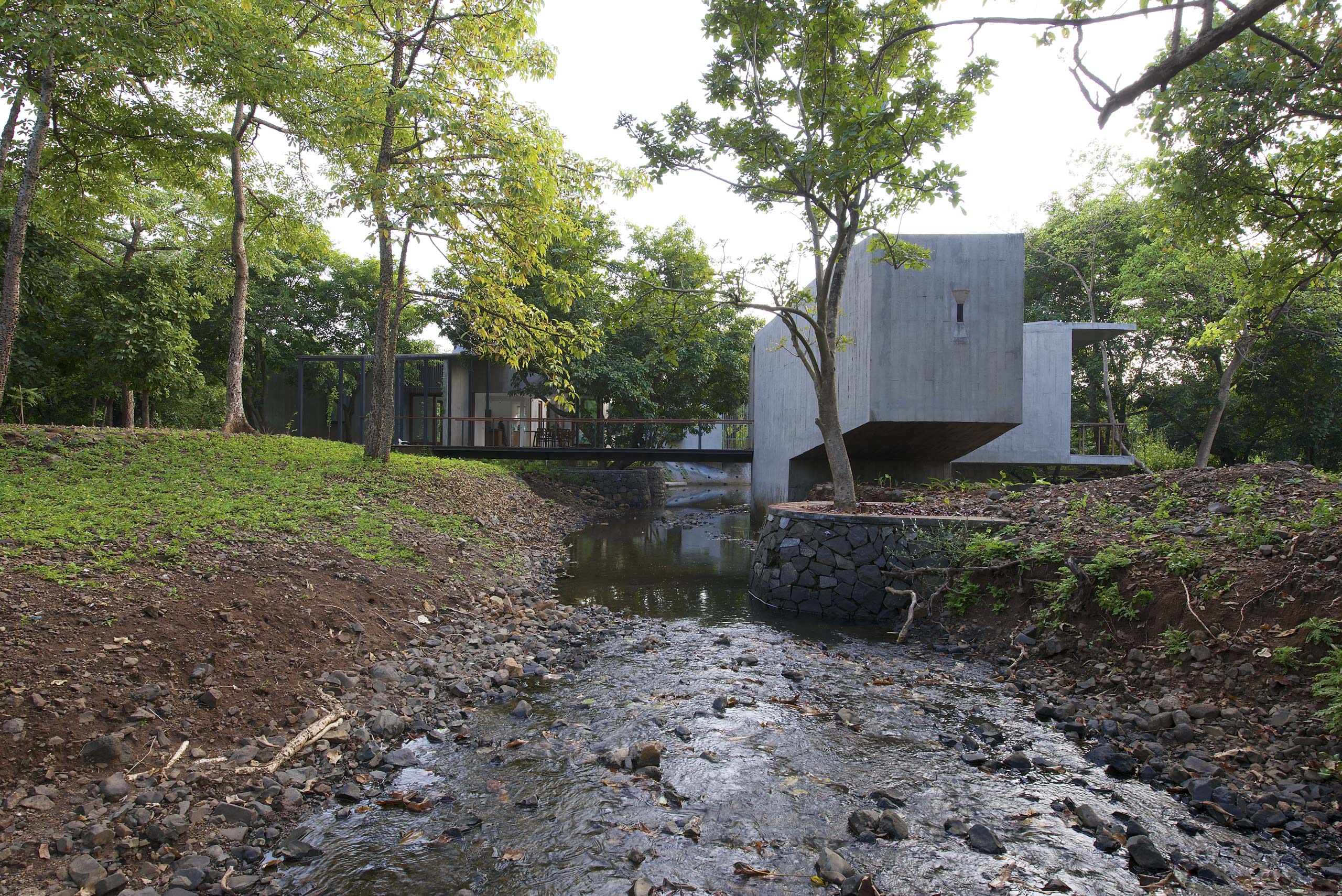 Robert explains that water bodies are beneficial to their vision, especially when building more rural homes, yet highlights the fact that the incorporation of a water body is not a ‘must’ in their work. He directs my attention to their Alibaug construction, House on a Stream. “The stream bifurcates the house, into two parts, (thus) the stream becomes the centre point of the house. Usually, a house will look into or over the landscape, but here that focal point of nature is instead a part of the house.” This decision to have the stream fork through the house is a part of the integral mindset of BRIO, where they work with an element they find on a particular site, and aim towards creating, exaggerating or emphasising an aspect of the landscape.

This playful principle is also represented in BRIO’s work on a private Goan beachfront. They had to work with an abandoned property made up of scattered shrubs and low lying lands that would become submerged during monsoon season. The client wished to fill the land, transforming the property into a flat land that would remain impervious to flooding. Yet no matter how desirable flat land is, feasibility does not always walk hand and hand with desires. In this case, BRIO calculated 2,500 truckloads of dirt/sand to properly fill the property. However, working against the land is not the BRIO way, so they pivoted to an intuitive concept that would not cause detriment to the local ecosystem.“What we did there was excavate part of the site, and place the dirt elsewhere. By digging three feet, the water from the water table came up, forming an interconnected chain of permanent water bodies.

By using steel stilts there were able to build upon the water, circumventing serious disturbance to the local ecosystem. This solution also created space for a higher volume of water and was able to alleviate the strain of monsoon flooding in the area by acting as a buffer. “The potential of the site needs to be sought out. You can alter and tweak land to have stronger natural resources,” commented Robert.

“No house should ever be on a hill or on anything. It should be of the hill. Belonging to it. Hill and house should live together each the happier for the other.” – Frank Lloyd Wright

Robert fleshes out that there are a lot of ‘obvious impulses’ when working with a certain type of landscape. For example, he points out a house atop a hill may seem like the best direction to go in. Yet he counters that capitalizing on far-reaching vistas, does not necessarily guarantee that this direction is the appropriate approach for the structure. Robert scaffolds this argument by looking to The Riparian House in Karjat. “In this landscape of undulating hills, there was one slightly larger hill, which is where we decided to locate the house.”

However, according to Robert, they decided to curb the obvious impulse of placing the home upon the hill, and instead “decided to place it at a point where the roof of the house was in line with the apex of the hill, so that the silhouette of the house merges with the hill and become one.” This process actually entailed excavating the mound of rock that made up the hill, ultimately embedding the structure into the rock.

Thus, the house lies upon a 1.4 gradient, nestling the structure into a hillock. This way the house does not look out of place, and blends into the surrounding environment in a seamless manner. Moreover, the roof of the home is covered with soft green vegetations. This not only offers another usable space, and helps the house blend into the sprawling hills, but also lowers the temperature of the house – a perfect example of adapting to a tropical environment with a low-cost solution that is also visually alluring. Robert describes that roof as pulling the grassy top of the hill over the roof of the house like a blanket, This element of design gives off a ‘haiku effect’, as the house represents seamless simplicity, yet is a rather complex entity.

By building into the rock itself, Shefali and Robert created a courtyard with the azonic flow, allowing light and breezes to softly pass into the home. These intuitive decisions that allow BRIO’s creations to interact with the surrounding landscape are a recurring theme in their work. They make use of the tools mother nature provides, and tweak them into elevating the appearance and functionality of a property.

Much like BRIO’s use of water, playing with light is a definite talent of theirs. By not forcing the surrounding landscape of a structure to conform to it, Robert and Shefali come to a consensus with the natural idiosyncrasies of a specific area, allowing them to manipulate natural light and use it to cast shadows and interact with structures. The strong ray of light emitted into the open-air loo almost functions as a pseudo a sundial. But more importantly, it transforms the design.

Although it appears BRIO’s strong suit is constructing residences in more rural areas, interiors are their urban bread and butter. So even if you live in a Mumbai high rise, Architecture BRIO is a surefire way to breathe some fresh air into your interiors. Whether is helping stateless Indonesian children have a home in Malaysia or creating a space that forges a connection with the surrounding land, Architecture BRIO is more than capable of transforming your dreams into designs that are easy on the eyes and the land they look upon.